We took off a bit late this morning for several reasons but mainly because I had no detail map on the Garmin gps, after finding out that this was due to a bug in Basecamp it was quickly solved, this was however not the only problem with the gps, once you selected a route the GPS freezed up 🙁 Having lost enough time we decide to navigate on our backup device a cheap Medion Tablet. Which works actually quite well. Besides this there was a little bit of a drizzle which luckily did not last long. During  our lunch break I managed to get the route of today working.

We finished our first off-road leg of this tour, first we followed a river bed which brought us through a beautiful canyon and later we took the “Col du Belkassem” (named after Belkassem from Sharia for Belgium?) towards Boudenib where we are now.

It was a tiring day mainly because I got a bit of a cold probably from cold Bastogne last weekend.

Tomorow we head for Merzouga via the piste near the Algerian border, for that we do not need a sat-nav. 🙂 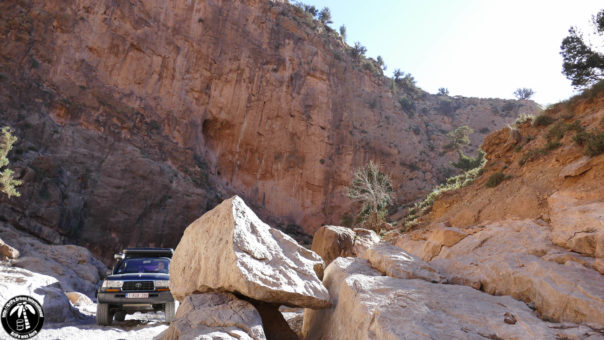