We arrived @ Algeciras about an hour before sunset,  we drove straight to Carlos Ticket office to buy our ferry ticket for tomorrow morning.   We plan to take the 8 o’clock ferry.  We checked in to our preferred hotel @ Algeciras the NH Campo de Gibraltar despite they have no restaurant for dinner and there used to be no wifi in the rooms (only in the lobby), we prefer this hotel because it has an underground parking that is high enough to fit our desert ship with roof tent.   (2m30 says the sign at the entrance) and, it is not far from Carlos Ticket office. Next door is a cinema complex with several restaurants, nothing fancy but the Italian is ok. They did some improvements BTW because there is now wifi in the rooms.

We left Irun this morning and drove through a white frozen landscape,  with thick fog that frooze onto our car.  The Toyota emblem got really cold. 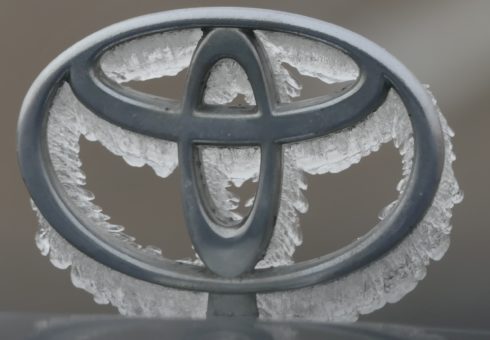 About half an hour before noon – just before Salamanca – the sun broke through.  And instantly the ice disappeared… A bit later we stopped for some Tapas and there were people enjoying a drink outside in the sun.   It got real warm in the car for the rest of the day we had lovely sunshine till just before Algeciras were it became a bit dark and cloudy.

Nevertheless, I checked the wheel bearing play and while doing that, I discovered the first item I forgot at home, the wooden block to put under the jack.  There is however no play in the wheel bearing so the noise is probably something else,  if it is something important we will find out sooner or later.

If we manage to get the 8 o’clock ferry and getting through customs goes smoothly, we plan to drive to Midelt, +-6 and a half hour’s drive from the port of Tanger.