In the middle of the night we were woken by a thunderstorm.  When lightning is immediately followed by a big bang you now it is right above you.

Although I had my earplugs the bangs were extremely loud.  At a  given moment we were convinced lightning struck just behind us, luckily no one got hurt.

Although massive amounts of rain fell and lightning struck at a high rate per minute there was no wind at all at ground level, very strange.

Today we visited several cemeteries. At the US one we stopped at the grave of Freddie Stowers.   Seventy three years after Freddie Stowers was KIA, his two surviving sisters received the Medal of Honor (the highest US military decoration) from president George Bush. 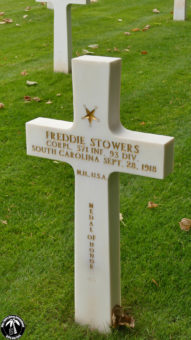